Fire'n'gungina heir to a lost empire

Fire’n'gun was a rough and tumble type of dwarf. Descended from a lost linage of royalty, was one of the last heirs to the dwarvin throne. She started out life as a tavern whore and dancer near the piers in Altdorf. One rowdy night she into a bar fight with a patron who failed to pay for her services. A fatal mistake for the poor man but it cost poor Gina her leg. After that her services as a dancer and wench were not making any money so she turned to a life working on barges and shipping freighters. She saw many cities travelling the old world water ways.

On her many adventures she discovered her linage and a map that could have been to key to restoring the dwarvin empire to greatness. Alas she met a bad stroke of fate and dies from wounds suffered from falling out of a third story window in the Greenfield Inn located in Rotters Ring, in Altdorf capital of the empire (for more information on that story read the game journals). 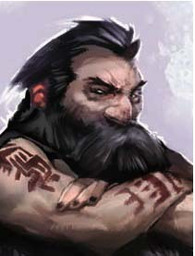 Thagus is a dwarf with a long dark esoteric history. He is stature is both proud and powerful. His arms are covered with purple tattoos. His face hosts a few scars and a nose broken several times that tell tale of his misguided youth. He is a dwarf feared by all all manner of “men.”
Currently he is known by a limited few to hold title to a shop that occupies both sides of the wall that divides merchants and rotters ring.

In the merchants ring Thagus is known by a different name and to be the proprietor of a ravenry providing communication to the merchant class and nobles alike spanning the entirety of the iron kingdom. A trader in both information and rare goods. His shop deals in rare and old items. While also providing safety deposit boxes and safe holdings to many merchants and nobles who don’t want people to know they have secret treasures hidden outside of the conventional means.

If you wish to contact Thagus please send a pigeon 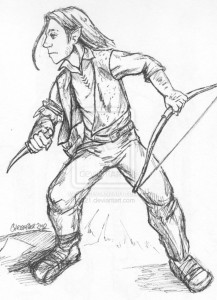 You want to live for ever?

Very little is known of Larry as the night our group of would be heroes met him he was found dead in an alley way with his throat slit from ear to ear and his tongue was pulled through the cut. He was last seen in an alley way shoved into a dark corner and let.

Word on the street is that he was found with nothing stolen. His money and jewellery still on the body. The shop keeper who’s shop he was hidden behind was taken for questioning. Other rumours are that there is some big mucker from the Merchants Ring who wants to find those responsible for the killing and quick. The only other gossip floating around on the street was that he was going to meet some crew of guys and take them through the maze. No one seems to be talking about what the maze is or exactly who it was who he was meeting but word is they are looking for them. The “they” looking for them is a little unclear at the moment but in time it will likely come to light. 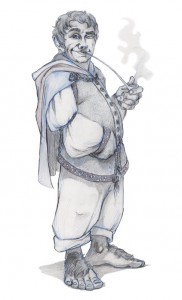