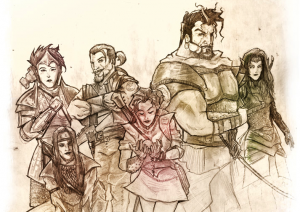 Please poset a picture and a history of your character here. You should al so include these five features.

All this information should be posted in the thread titled “Charactor Histories” under your Characters name. Please include a picture in this post as well …. several if you wish, the post is yours to capture your charactor is all his/her glory.

An email should be sent to me with a brief description of your character’s personality no more than 4 paragraphs in length. (example of what i would like post to look like below) This information will be posted on this page. (your prized possession(s) should be mentioned and described in this brief write up as well as your characters motivation to do the things that you do) 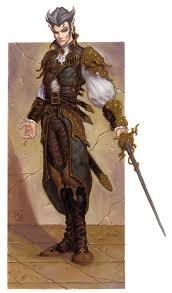 I am seek the winds of magic but also dace with a blade.

What can I say, Sigmar is my life. Literally! Twice my life should have ended and twice my Lord Sigmar has saved me from certain death and given me life again.

My life is a turmoil. In many ways I am still greatly miss the family that has all died and the gratitude and love in my heart for the man who took me in and adopted me is often overflowing when I think on what he has done for me. Only a few short months ago I knew who I was. What I wanted for my life. I was to school in the great School of Magic and become a Wizard of unspeakable power. But now my eyes have been opened and I see a new direction that I must follow. I will learn the way of the blessed and powerful Sigmar and by his might become a powerful priest. That is if I can survive this quest that he has sent us on. It is great honour to follow Him.

I respect all those who I call my friends even if I have an intellect that passes them. I really do think its cute how they try. They are all good in a fight even if they sometimes hide and fight from so far away. I maybe able to learn from this. Tink is especially close to my heart the first to befriend me once we arrived in Altorf she has become the sister I never knew. No one better mess with her or feel the tip of my sword.

I know not where this adventure will take us but I know I will learn insurmountable knowledge and that Sigmar will be with us always. 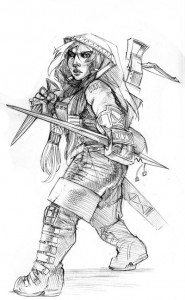 Short, thick and deadly with a blade!

Funky as her friends call her works for her parents during the day as a cook in the Greenfield Inn, located near the inner wall of rotters ring. But by night she walks the street with pick pockets, cut throat, seeking adventure and robbing tombs. She has a few loyal companions but bottom line is she is out for herself and looking for a fast buck. Recently she was double crossed by a coachmen who nearly cost her life. Now she sits and plots her revenge while she heals from her wounds. “Soon boy, soon I will have you in my hands and when i do … you’ll be sorry!”

Funky as her friends call her works for her parents during the day as a cook in the Greenfield Inn, located near the inner wall of rotters ring. But by night she walks the street with pick pockets, cut throat, seeking adventure and robbing tombs. She has a few loyal companions but bottom line is she is out for herself and looking for a fast buck. Recently she was double crossed by a coachmen who nearly cost her life. Now she sits and plots her revenge while she heals from her wounds. “Soon boy, soon I will have you in my hands and when i do … you’ll be sorry!” 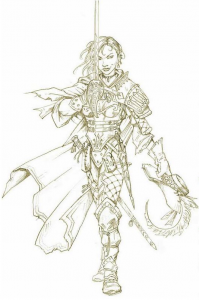 I don't just sing... I also know where the pointy end goes!

Dad was killed when I was 12. Somehow, I knew he wouldnai??i??t be coming back from that last trip over the south sea. A hunchai??i??intuitonai??i??call it what you will. I just knew.

When we were young, my brothers and I would play with wooden swords and shields, pretending to maim and slaughter those nasty orcs and foul flying creatures that Dad would tell us stories about. He could evoke images of these beasts that rivaled the local bards. At least we thought so.

I had joined the Church choir when I was 7, singing songs of Sigmar and traveling to nearby villages around the holidays. I somehow felt like these trip were in some way comparable to when Dad left for war. They werenai??i??t. I know that now. But a girl could dream, and thatai??i??s what I did.

After Dad died, I left home. There was nothing left for me there. Mom was an empty shell, and my brothers went off to avenge Dadai??i??s death. I left and did not look back. Before going, I swiped the familyai??i??s heirloom sword from above the fireplace. It has never left my side.

(Dorah is a wonderer and a singer. A comely face and figure help her to survive in this grim world of perilous adventure. She has been many places and met many people, yet she has never found her calling. upon arriving in Altdorf she has felt a strange sense of Destiny calling out to her begging her to take another life. She most recently claims to have met a god and has makes his sigil upon her breast at one of the local tattooists.) 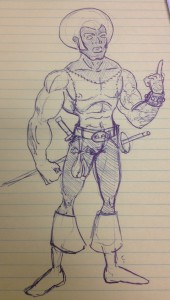 I like to rock out and eat rabbit food. I also like to fall out of windows and do an amazing double back layout falling full twists then land very badly on my head from thirty feet in the air. Nearly killing myself and landing heavily on a female dwarf whom we had just robbed and savagely struck in the face before we dropped her through the window that i fell out of … I am not as nimbly bimbly as one would think an elf to be. Mostly I just like to Rock the fuck out with my Guitar and bang lots of groupie chicks with my spindly elf dick. Oh and like to move it move it.

After several miss adventures with his friends and fellow Sigmarian beleivers Dolsin has had many encounters. Leaving drown from attempting to save is preforming prtnet Dora, after jumping in an ancient Dwarvin pool while still wearing all his armour. Suffering several near death wounds. Now the poor elf was most recently tainted by Chaos that one of his friends unleashed onto the world (by mistake) and he was mutated and given a 3x normal head sprouting a 3 foot long snail like stalk eye. While also having his arms mutated in to a second set of legs. After surviving that whorid set of mutations he sought the aid of a witch and embalmer. Whe seemingly sucsessfully transplated his head with that of a black man and rebuilt his upper body to support a stranger set of miss matched arms. One of an Mediterainian and that of an inhabitant of Araby both heavily muscled and very different. Also our poor hero suffered a mutation of the mind and he is deathly afraid of elfs. I supose he transplant surgery left him with an altered appearance but luckly with that of a human not an elf, albeit a hanusly disfigured “frankenhuman” but still human.